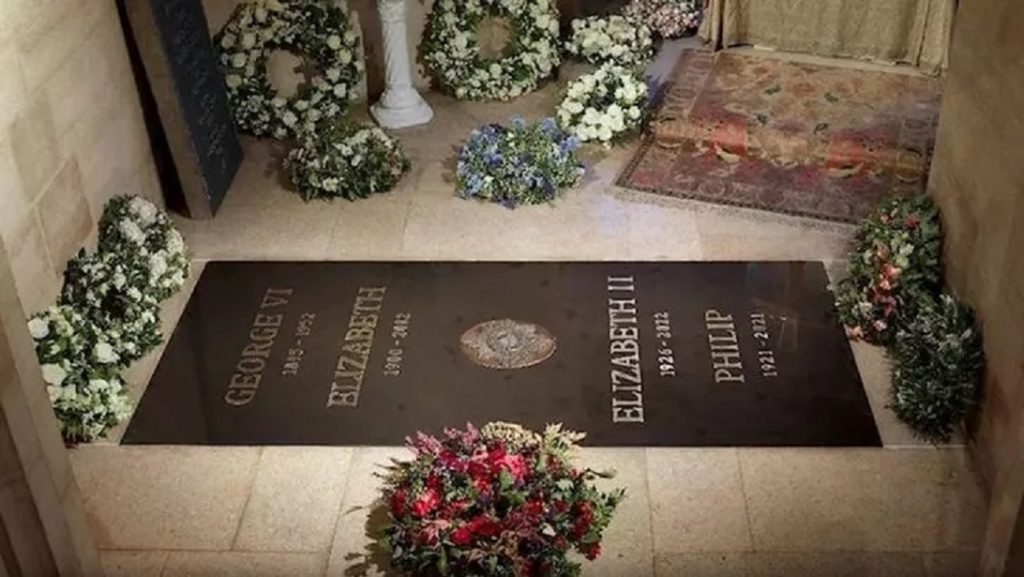 The graveyard of Princess Margaret, sister of Queen Elizabeth II, is located in the chapel at Windsor Castle in west London.

Queen Elizabeth II, who had been on the throne for 70 years, died on September 8 at Balmoral Castle in Scotland and was succeeded by her son Charles.

Buckingham Palace shared the tombstone of Queen Elizabeth, who died at the age of 96 and was buried with her husband, Prince Philip, in St George’s Chapel last week. The tomb will be opened to the public on Thursday.

Buckingham Palace, Queen of England, who died at the age of 96. She shared a photo of Elizabeth’s grave for the first time.

On the plate surrounded by wreaths and bouquets, his father, King VI. George, his mother, Queen Elizabeth, and his wife, Prince Philip, who died last year.

Black marble with hand-carved brass lettering was brought from Belgium.

“The ledger stone has been placed in the King George VI Memorial Chapel following the burial of Her Majesty Queen Elizabeth,” the royal family’s official Twitter account said.

Queen After Elizabeth’s funeral on September 19, she was buried at the same time as her husband, Prince Philip, who died in 2021.

The Queen’s father, King VI, who died in 1952. George’s mother, Queen Elizabeth, who died in 2002, and his sister, Princess Margaret, who died the same year, are buried in the same chapel.

Queen II, who served on the throne for 70 years. Elizabeth died on September 8 at Balmoral Castle in Scotland.

Queen Elizabeth III was married to King George III on Monday evening, after a state ceremony at Westminster Abbey and a memorial service in Windsor. He was buried in a private ceremony attended by Charles and other members of the royal family.

It will be open to visitors for those who want to see the stone bearing the name of Elizabeth’s father.

The British will be able to visit the Queen’s tombstone from Thursday.

The chapel will receive visitors on all days of the week, except on Sundays when it is opened for worship.

According to the information on the chapel’s website, visitors will pay an entrance fee of £28.50 on Saturdays and £26.50 on other days.